"20.5L The Raintree Canopy": Algae Bloom & How it was controlled

As expected, under the high-intensity lighting, algae and fungus developed very fast during the first week. Fungus also covered all over the driftwoods. I was not so worried about fungus because it will naturally disappear when tank matures and also it is easy to clean the fungus using algae eaters such as Otocinclus/Shrimps or Horned Nerite Snails. 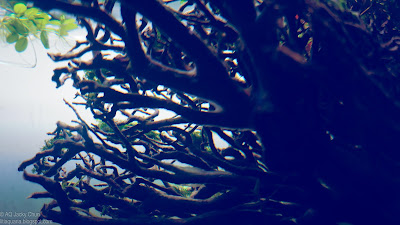 Blue Green Algae was also seen on every branch and covered the mini fissidens. It might due to the water circulation since the canopy is quite big which probally on the way of the flow direction.


Even with some matured bio-media seeded together with new bio-media in the filter, the tank has not been cycled right away yet. Hence, I could not put any algae eater crew there. Some actions to be taken to minimize the bloom of algae at that time. To reduce the lighting intensity, Salvinia minima was put in the tank. It also helped to absorb excess nutrients as well, so less chances for algae to compete with other plants. Even some trimmed stems plants were also put in the tank for the same purpose.

After about 2 weeks, tank was fully cycled! Yay! :) Water change for about 70% to lower down excessive nitrate (NO3) level before algae crew is on board.
Since the tank has lots of fungus and algae (i.e. blue-green algae, brown diatoms, thread algae..etc.), so different kind of algae eaters were deployed to clean up this mess. Two Otocinclus affinis and five Amano shrimps were there at first. They worked really well and algae reduced dramatically after a week. However, since this bonsai has lots of branches that twisted densely, 2 dozens of fire red shrimps were placed in the tank so that the smallest area could be taken care of. As expected, those small creatures really had done a really good works! Algae is out at bay! :)  And the tree was really relieved!

And to record their hard work, nothing is better than a reward video at week 3. Hope you enjoy it! Cheers and have a good night! :)